Sandra Shannonhouse received her B.A. in 1969 from the University of California at Davis.  She studied at the Accademia Italiania de Costume e di Moda in Rome before returning to UCD to achieve her M.F.A. in 1973.  She has been featured in several one-person exhibitions and included in numerous group shows around the country. She has been awarded three public sculpture commissions for the Benicia Public Library, California; the Herb Garden, City of Davis, California; and the Davis Community Church, Davis, CA.   Her work can also be found in the collections of the Rene and Veronica Di Rosa Preserve, the Marriott Corporation, and the Mint Museum of Art, Charlotte, NC.

“My recent work, primarily in cast bronze and aluminum, has addressed issues of “attitude” by creating individual environments within sculptural forms.  Manipulated natural and man-made materials are fashioned into organic lines that spiral, curve and intersect within an arced form. The viewer is invited to both view the sculpture from the outside and to enter the space formally defined by the structure.  The distinctive lines of each piece pre-determine an  “attitude”  inside the environment– from “Rosemary Place,” a skirt form of manipulated and embellished branches to “Shifting Iris” a bowed wall of individual corrugated spiral forms and undulating lines.  Upon entering the space, there is a shift in role from viewer to participant.  Similarly, “Tivoli Trinity” addresses an attitude of power combining linear elements manipulated and cast from nature with more representational symbols of sets of gloves, and “Untitled (pink)” appears as an abstracted over-sized ‘dress’ form gone awry punctuated with a symbolic wind-blown bouquet. All of these works investigate human attitudes and the formal relationship of the human body in space” 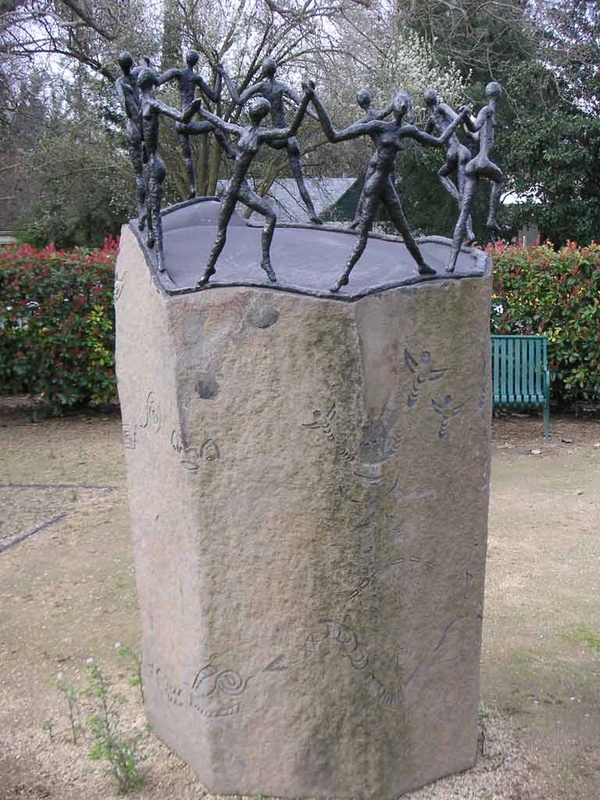